In the early 1900s, the population of the fledgling town of Red Deer was approaching 500. Fear of fire was always prevalent and as the town began to grow and the concentration of wooden buildings increased, the likelihood of costly fires increased.

The first firefighting equipment consisted of 24 wooden pails, three ladders, and a hand-operated hose reel. In 1903 the town council approved the purchase of a second-hand chemical fire engine. Shortly thereafter a horse stable was attached to a house and the first fire hall was created. The fire hall also contained two jail cells and was the site of town council meetings.

Horace Meeres was Red Deer's first fire captain. He and his family moved into the fire hall, putting up a curtain to separate the police cells from the rest of the house. In 1904 residents rejected the proposal to purchase a new fire engine; shortly after they approved the decision to construct a new fire main system. Ironically, on voting night a fire broke out in the Michener Block that caused over $22,000 in uninsured damages.

The town council soon authorized the creation of a 16-man volunteer fire brigade. Volunteers were used in Red Deer until 1969. Horace Meeres was promoted as the first Fire Chief. By April 1905 the new fire main was completed for Red Deer. It provided 13 hydrants from which the fire brigade could draw water. A year later Fire Hall No. 1 was constructed on the town square in what is now City Hall Park.

Membership in the volunteer force increased to 28 by 1912. Numbers soon declined as many men joined the Canadian Expeditionary Force, including Chief Horace Meeres. The new Fire Chief Archie Taylor served for 36 years. Under his leadership the department purchased its first motorized fire engine in 1926, instituted first-aid training for all department members, and increased rates of pay. During the Depression money was so tight that Chief Taylor could not even replace a worn out fire hose.

The duties of a firefighter during the 1950s were quite different than today. As municipal employees, three full-time firefighters were expected to dispense city gasoline, patrol the ice arena, maintain the public wading pool, and clean city hall and council chambers, all in addition to their firefighting duties.

In 1961, the fire department moved into a new Fire Hall No. 1 in the old Armoury building on 49 Street. It remained at this location until the current Fire Hall No.1 on the corner of Gaetz Ave and 45 Street was opened in 1991. In 1962, the fire department also assumed responsibility for ambulance services in the community. Originally called the Red Deer Fire Department, the name was changed in 1995 to Red Deer Emergency Services. 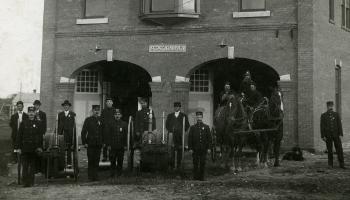 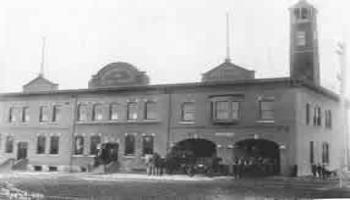 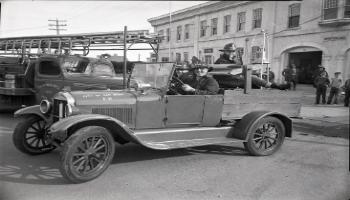 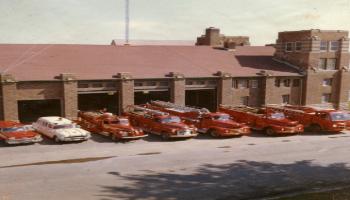 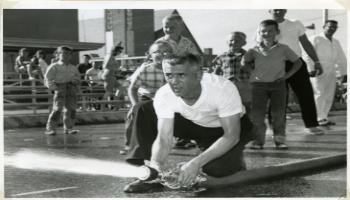 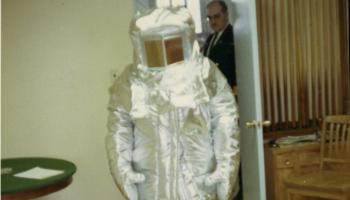 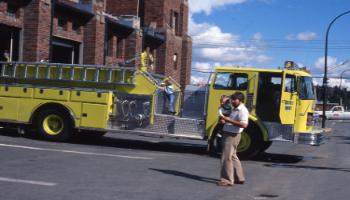