Preventative maintenance treatments are necessary components of all pavement management programs. They are used to slow down ongoing deterioration, and preserve or improve the surface condition without significantly strengthening the roadway. The treatments are applied over the entire service life of the pavement and include activities such as crack sealing, spray patching, pothole repair and a relatively new-to-Red Deer treatment called micro-surfacing. 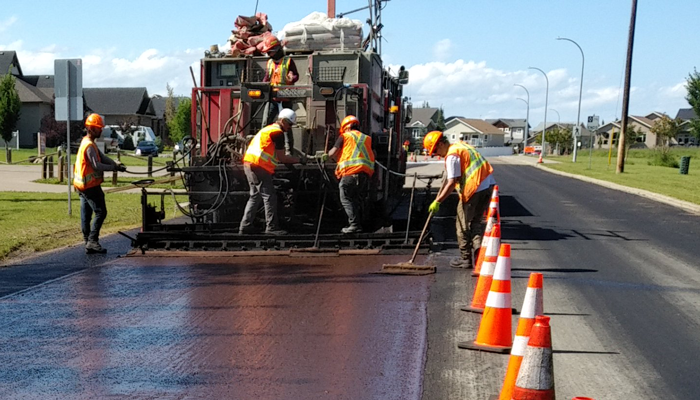 Micro-surfacing is a thin, but durable, surface treatment used to preserve existing asphalt roadways without the full cost and inconvenience of full pavement surface removal and replacement. It is used to both preserve and restore an existing asphalt surface by sealing the surface to minimize water infiltration and preventing further oxidation (natural weathering) of the pavement surface. If this deterioration were left untreated, it would lead to the quicker formation of potholes and other distresses to the paved surface.

Although visually it may appear similar to the pavement surface that roadway users are familiar with, it is not a new asphalt pavement once completed. It is most often applied across the entire surface of the weathered or worn roadway, but as it is not compacted during placement, it initially has a rough looking texture with some loose aggregates. This is considered to be normal for this treatment, and as vehicles drive over the surface, it will smooth out.

In addition to sealing the asphalt surface, micro-surfacing can be used to correct minor rutting issues and also improve the skid resistance of the pavement surface. The treatment is expected to extend pavement surface life by five to eight years. This process allows us to keep good roads in good condition so we can reallocate funding to roads that are in higher need of repaving or reconstruction. It is another tool which can be used to maintain our asphalt surfaced roadways, with a goal of minimizing capital and operational costs yet maximizing the pavement lifecycle.

The following streets are scheduled for micro-surfacing this year:

In general, roadway users can anticipate the following to occur once traffic control is in place:

To help ensure that the work is completed effectively and as quickly as possible, please: